I was awaken by a call at 4:50 a.m. this morning by Dr. B telling me that Sweet Mallorie had passed away. I had just talk to Connie today for more than an hour and they had just put her in the hospital as a precaution since it was the beginning on the weekend. So the call was so shocking.
John, Connie, Carley, Hannah, Matthew, and Jacob need our prayers. On the side of Annabel blog you can click on Mallorie name and it will take you there or just click on this link to her blog
Posted by Cathy at 8:01 AM 8 comments: Links to this post 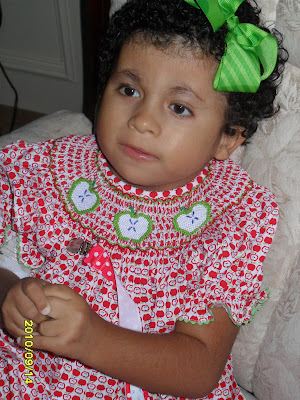 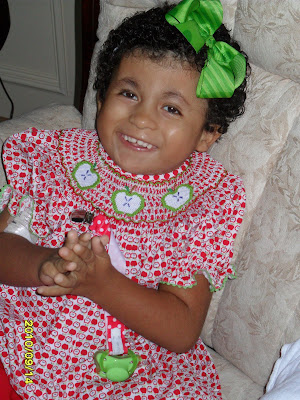 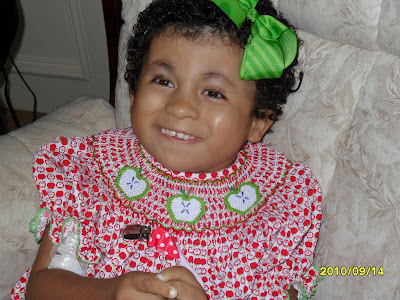 Annabel is back on TPN and Lipids. She is off of any thing into her gut unless it is medicine. They are trying to rest her gut again in the hopes that it will help it to begin working again. She is doing fine and seems so happy. That is the crazy thing about TPN/Lipids. She is stronger and outwardly healthier than ever. I try to just look at her day to day and enjoy all these strong hugs and kisses she love to give. She stands so tall now and is doing well in her therapies. She isn't weak like before the TPN. But in my low times I get too focused on what is happening inside of her with the TPN/Lipids and her liver. My sweet nurse constantly reminds me to focus on quality of life, meaning today. I am trying and she makes sense! I am still desperately praying that she will again take food into her precious tummy.

The pictures below were in celebration of Derek's 29th birthday. Oh no, I can't be that old! But I wouldn't trade a day of being this old, or wouldn't have my oldest and first born son! Linzy's family joined us for his birthday along with my Tyler and Tara. Of course, Carly and Colette are off at school. Cindy, Linzy's mom make the most wonderful red velvet cupcakes with the creamiest icing. Thank you Cindy for supplying Derek's birthday treats and for David joining us after a long hard day at work! 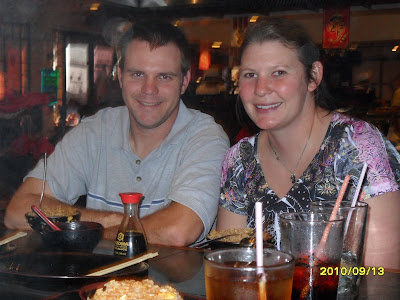 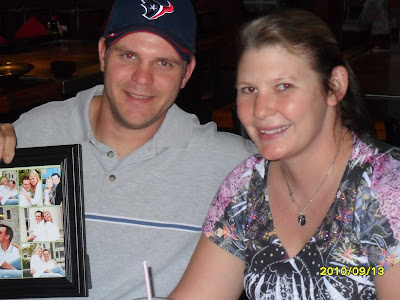 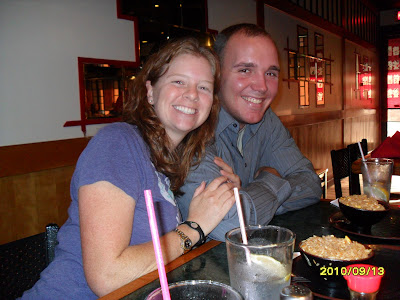 Posted by Cathy at 8:55 AM 4 comments: Links to this post 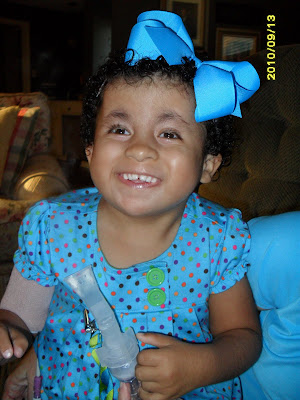 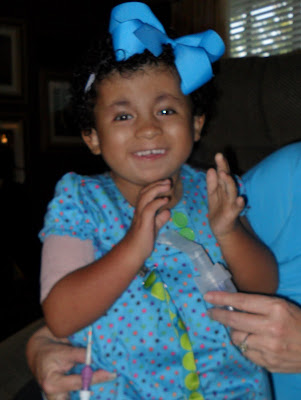 One of the things I keep forgetting to mention and am very thankful for is that Annabel hasn't had a UTI since she was released from the hospital. This is probably the longest she has gone without a UTI. Her urologist commented on the fact that probably the TPN is keeping her very hydrated. But in his next sentence he says "but you gotta get her off!" But for the issues of UTI I want to be so grateful and thankful that we aren't dealing with these. She is also still taking Bactrim, a prophylactic dose once daily to help with her bladder.

I am thankful for those who wrote to answer my question, through your comments or email. Several have suggested Omegaven which supposedly doesn't harm the liver as much. This is in trial testing and at this time Annabel is not eligible as this isn't being given to kids her age. It maybe that she isn't severe enough yet to be considered. Also, for those who told me that their child couldn't tolerate the JG button either.

We did see GI last week (still likin' our new GI dr.) and guess what, yep, that JG button for the fourth time was out. He says she just can't take it, between all the retrograde activity and her gagging/retching he says it will not stay down. This last time he used one even longer and within 48 hours I knew it was out. He also cut her back to 1/2 dose of Erythromycin but thinks she won't be tolerating that either. We are down to two meds that aren't FDA approved and when I read all the things that it can affect, like cardio, pulmonary hypertension, urinary, renal, etc. I don't think I can do these last two. She is back down to 15ml. per hour and not tolerating that all the time. He is placing her back on TPN full time and also adding Lipids back. He says he really doesn't know if she will be able to eat and tolerate foods in her tummy. Annabel will be having a procedure to excise a fatty cyst from the back of her right ear. She has had this since birth but now it has begun to grow and come through the inside of her ear. We are not worried and I feel confident she will come through this like a champ. At this same time the GI dr. will go back in for some biopsies of things that he wants to look at again.

She is going to school most days and loving it as she always has. Our three nurses are so much help and I am so thankful for Debbie, Rebekah and Ashaunti!

I am really excited about getting to see the twins, Carly and Colette this weekend. We haven't seen them since we help them move in. Carly and Colette never really liked being away for long period of time like summer camp so this is long for this mommy! I am thankful for Tara, Derek and Tyler who still come almost daily to visit.
Posted by Cathy at 9:37 PM 6 comments: Links to this post