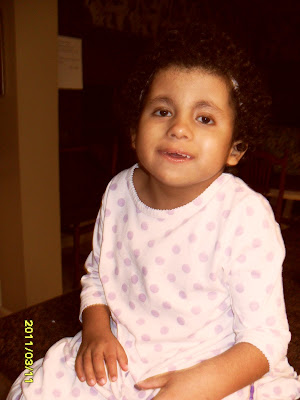 Her is my skinny minny sweet Annabel. In less than a month she has gone from 33lbs. down to 29.2 lbs. I can't even remember dates any more or exactly when things occurred. She was removed from TPN in the later part of February when she was at TCH for yeast. My wish has always been for her to come off of TPN. The most pressing reason is that she had become septic 2 times in 2 months. The other reason being her liver and the effects the TPN/Liver has had since June, 2010. While she was hospitalized in February at TCH they made a really big push for food. They wanted her on Pediatric Compleat for the calories saying that she couldn't get enough from the breastmilk. I agreed to try the Pediatric Compleat again but only if it was 1/2 breast milk and 1/2 Compleat. It was too much too fast and even though I was skeptical I needed to let Annabel's body tell the doctors. Of course early March we ended up dehydrated because she couldn't stay on the compleat as it was tearing her gut up. While at the ER they learned our new PICC line wasn't working properly so we were admitted, line removed, femoral line place and then a few days later new picc line inserted and released.
We had our appt. in Houston with GI. I was so ready to beg to get back on the TPN as to I could see her little body weak and frail. Her arms and legs were so thin and her face seemed so tiny. Her coloring was pale and she just didn't have the energy. We were having to go easy on the feeds again and I would only agree to begin the breast milk.
Just recently Annabel was on the vancamycin for her UTI and the Fluconazol for the Yeast. Within five days of finishing the vancamycin her culture grew another bacteria so Dr. B placed her on Bactrim which for a couple days appeared to be clearing the urine. On Tuesday Annabel began running a fever not too much over 101. She was also beginning with a cough and a wet nose so we just thought she was getting a cold assuming the UTI was being taken care of by the Bactrim. By Wednesday morning her urine was having troubling coming through the catheter and she was vomiting. We were suppose to see Dr. B for follow up from the hospital the next day but opted to call for appt. on Wednesday. It was found Annabel's urine was worse and she needed to be on IV antibiotics again. A culture was drawn and sent off and should have results Monday. Dr. B is guessing the bacteria that she was on the vancamycin for is back/or not clear from the round of vanc. It is getting so frustrating with these UTI's but anyone who has followed us before know we have been here before.
So with all this said I find myself rejoicing in the TPN/Lipids running through her veins once again. Just since being placed on it this week I can see the weight returning and her energy returning. Yes, we are still giving her the breast milk and will continue. Annabel is going on 9 weeks of breastmilk and not having to take any laxatives/enemas. This is another blessing to us. When she is placed on laxative her gut swells so big.
I haven't written recently due to the fact that I feel like a broken record. I don't want to complain because Annabel is still so happy. We wish she were free of pain but I am thankful that her time of pain seems to be limited and quickly resolved. I don't know what the answer is to the excess of antibiotics. I know she needs to stay off but the option is pain for her/or the possibility of becoming septic having this central line is tough. We realize with the many antibiotics the risk for yeast to occur again.
There is so much I am thankful for at this time. I have help (nurses) during the days and also three nights a week. I have found that 3 good nights of sleep get me through my week. I know without a doubt when I am up the other nights that I will have a reprieve for 3 other nights.
I am thankful for Dr. B and her patience and understanding of Annabel and her journey (of course, patience with her crazy momma) and Dr. C in Houston who continues to try to figure out Annabel and her gut issues. I am so thankful for my family who loves Annabel and comes to see her each day. She truly is the sunshine in each one of our days!
P.S. There has been some true Angel's who have/are providing Annabel with some much needed breast milk. The milk bank is critically low and we have not been able to receive much milk from them. I won't mention names of the donors in case they don't want to be mentioned but please know that each time I open a fresh bag I am thinking and praying for you and your child.
Posted by Cathy at 3:20 PM 2 comments: