NO quite sure what is going on.... 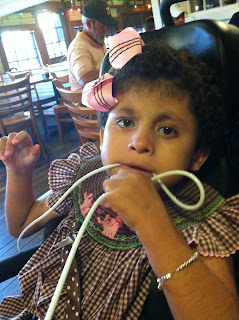 Annabel was sick almost two weeks ago with high fever, cough and much congestion. She has lots of loose stools.  She was placed on Zithromax and they fever subsided along with the loose diapers. But her cough and congestion continued so she was placed on mucomyst, changed from albuterol to xopenex. Her mucous is still very sticky, almost like glue... She has it coming out in her stools, up through her mouth with the gagging/coughing and out of her g-button. She has an excessive amount of gas. Her tummy has begun to distend. There are some questions to maybe it could be her formula (ElaCare). She has trouble with most all of the disacarides. Last time we talked with GI prior to her surgery, we were told ElaCare is basically the end of the road, that Annabel had tried most everything, including the RCF that was carb-free.
We are going to give her a little more time but she seems tired and mostly disinterested in all the things that made her the happiest.
She is still getting the 1200 mls. of Ela Care except when she was the sickest a couple weeks ago which we had to switch to pedialyte.
Wish I had something more inspiring to write but it is hard to see her not feel well and not know how to help her. We had to cut back on the swimming till she felt better. Hoping we get to swim before it get too cool.

Posted by Cathy at 9:58 PM 3 comments: Links to this post