I continue to be amazed at the blessings that are allowed me through Annabel. I just wanted to post a little tonight and I will follow up with more pictures at a later date. A couple weeks ago I was contacted by Brianna Botts family who lives in Florida. Brianna is 21 months old, has gorgeous blue eyes and Trisomy 18. I have been following her on her CaringBridge site and on occasion Brenda and I email each other. They were coming to Texas this coming week and were willing to come in early to meet Annabel. Annabel had to be in Houston for a drs. appt. and so they flew in early on Friday so we could spend sometime together. We stayed at the same hotel and were able to spend some great relaxing time just hanging out and watching our girls. Brianna has a beautiful family who loves her very much and take unbelievable care with her. Just in the short time we were together I learned so much. There was also a family who lives in Houston with a nine month old little girl, named Rachel. She also has Trisomy 18 and I have been in contact with her mom, Sarah. She was able to come to the hotel and meet with us Friday evening. She couldn't meet up with us on Saturday and we were all sorry for this. As most of you know, Trisomy 18 is so rare that it was just amazing and an incredible blessing to be sitting in this hotel with these 3 precious little girls. The conversation flowed so freely as we just shared so much information about our little girls. There are so many similarities but there are also many differences. Rachel who is only 9 mths. was already sitting up alone. Brianna who is 21 mths. old would roll over, get up on all fours, very close to crawling. Annabel always has seemed so small to me when compared to other children. She looked big for the first time to me last night! I will add just a couple of my very armature photos but will follow up with Brianna's mom who took many more pictures with a much better camera. I am so thanking God from the support that He allows to bless us through these families of these wonderful miracle babies. 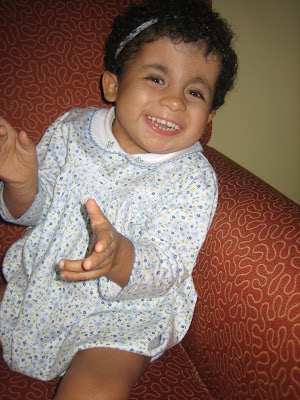 ANNABEL AWAITING THE ARRIVAL OF HER NEW FRIENDS!!! 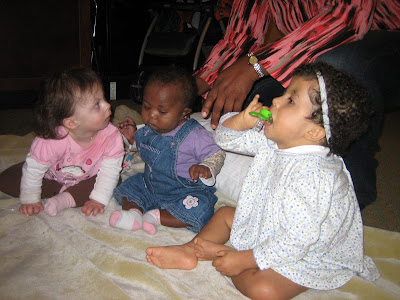 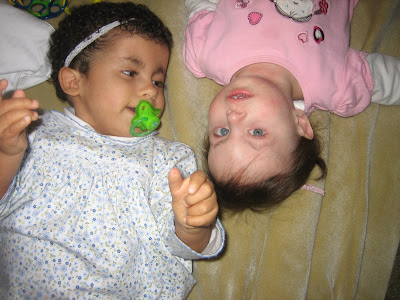 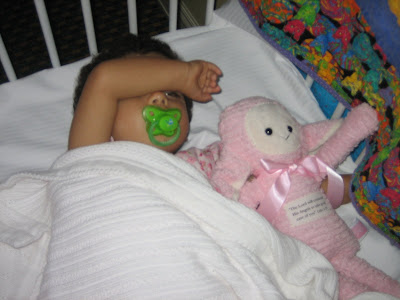 EXHAUSTED, as she sleeps with one eye open!
Posted by Cathy at 11:00 PM 14 comments: Links to this post

Celebration of Pink for Magdalena... 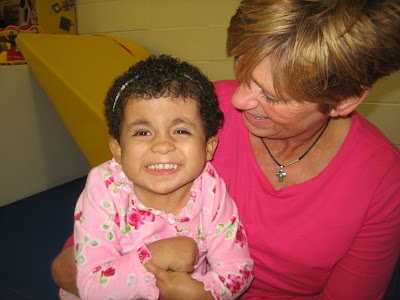 Just a quick pic of Annabel celebrating the life of precious Magdalena! She lived 167days. Her link is on the sidebar of Annabel's blog here. If you have time to watch the clip of her celebration of life, make sure to watch at the very end which is a video of her smiling so much! What a precious life this little one lived. 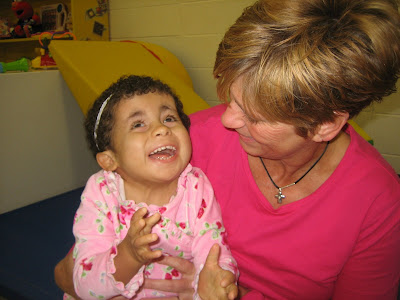 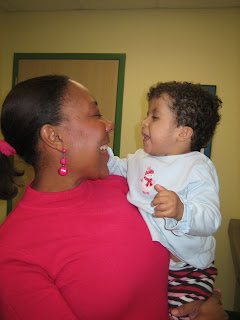 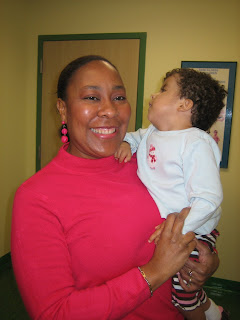 Annabel was fairly stuffy today so we decided a visit to our pediatrician was on our to do list for today. We went to their walk-in clinc and the entire time I was silently praying that we would be able to see Dr. B. I knew today was her birthday from my friend Connie, Mallorie's mom. When the door opened I felt like I hit the jackpot, it was Dr. B, yippee. We wished her a big Happy Birthday! She had a good look over, got our scripts and were out the door. I have attached a couple pictures of Annabel with her. Thank you, Dr. B and wishing you a great Birthday!

HEAVY HEARTS...
It is with such a heavy heart that I post that Magdalena has gone home to Heaven. Yes, we know this is a better place, she is free of any pain, filled with joy and in the loving arm of her Heavenly Father...Please pray for Julie and Noah, her parents and all who have loved Magdalena even before she was born.
Posted by Cathy at 1:03 PM 5 comments: Links to this post

This describes our past week. Before this began Annabel had her mini-one button replaced. The last one was a little too long and therefore stuck out too much. This time around it was much easier and almost no recovery. Annabel's little friend Mallorie (Connie's daughter) also had hers replaced and we took a picture before going into our separate rooms. 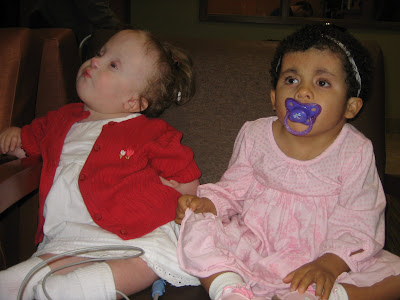 Several of you out there in blog land know Laurie from Ca. She has a huge heart for our special babies and is a major prayer warrior for our babies and us mommies! She is a huge source of support with her kind words and inspiration. Today in the mail we received this precious Bundibunny in honor of Annabel and her new button. This cute little bunny is sporting his own G-tube and comes with his little story. Laurie, this is such a sweet gesture and he is the silkiest, softess bunny ever, thank you from Annabel and myself. 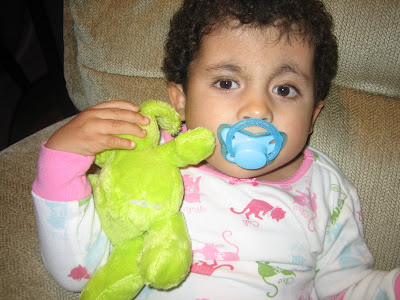 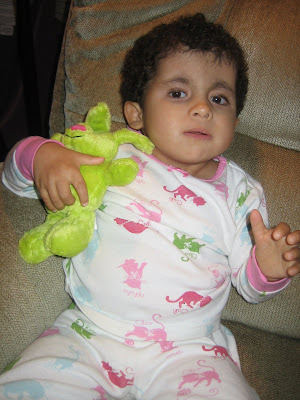 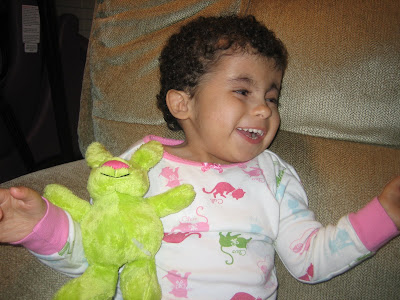 This next picture is of Annabel leaving the hospital in the sunshine sporting her cool shades! As any of you know with these Trisomy 18 babies the sunshine is very painful to their eyes. That is one of the greatest things I learned at the SOFT conference in reference to their eyes. 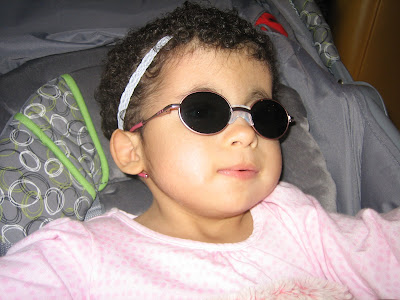 Now for the runny poo and the green snot! No I promise no pictures about this! We will be going to the doctor tomorrow for an antibiotic. My suspicion is that the UTI she had a couple weeks ago didn't totally clear up. Still show many white blood cells and this usually turns into a respiratory infection. Don't think she has anything contagious with her tummy but her intestines I think are just messed up. She want to eat but don't think she is digesting right. Nothing ever makes her stools loose but as of late we are struggling with this. I do believe she had a virus about 10 days ago and her gut just hasn't returned to normal yet.
Annabel's big sisters, Carly and Colette had a soccer tournament this past weekend. The weather cooperated about 1/2 the weekend but Annabel and I spend lots of time in the car with her watching her videos and me watching from the car. They had a great tournament and came in 2nd. Big sissy Carly ended up with a cleat to the mouth (shown in picture)and three jammed fingers due to someones foot kicking the ball as she was stopping it at the goal. She is the goalie for the team! There is also the team picture and they are the two in the middle on the back row. Go Kelly Dawg's for a great weekend of play! 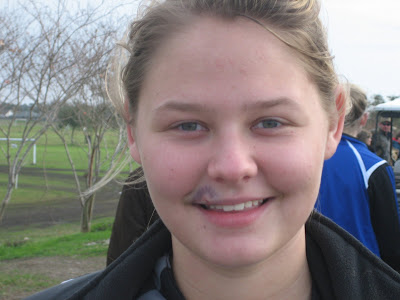 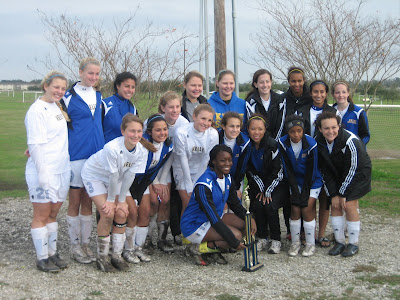